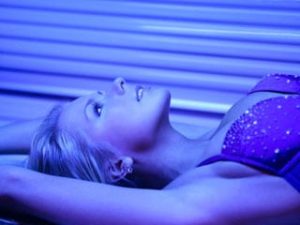 Despite public knowledge of the dangers associated with indoor tanning, about 10 percent of Americans still use tanning beds each year. More and more evidence continues to surface pertaining to the risks associated with tanning beds. The latest was presented at the 10th AACR International Conference on Frontiers in Cancer Prevention Research, held October 22 to 25.

The study confirmed the association between tanning bed use and an increased risk for three common (and sometime deadly) skin cancers: basal cell carcinoma, squamous cell carcinoma and melanoma.

For the study, the researchers followed 73,494 nurses who participated in the Nurses’ Heath Study II from 1989 to 2009. They tracked tanning bed use during high school and college years as well as when the women were between 25 and 35 years old. Researchers also tracked the overall average bed use during that time in relation to basal cell carcinoma, squamous cell carcinoma and melanoma.

“These results have a public health impact on skin cancer prevention for all three types of skin cancer. [They] can be used to warn the public against future use of tanning beds and to promote restrictions on the indoor tanning industry by policymakers,” says lead researcher Mingfeng Zhang, M.D., research fellow in the department of dermatology at Brigham and Women’s Hospital and Harvard Medical School in Boston. Follow-up studies are already being planned.